An interesting debate went down at the TED Conference in Long Beach, California which began on Tuesday between 2 economists with different views on a question that is being asked on the global economic scene if  progress as we know it has reached its end.

Robert Gordon an economist at Northwestern University began the debate with a talk for most of the 18 minutes allotted to him tossing cold water, in pails, on any thought that we can innovate and move away of the developed-world stagnation. He pointed out that all economic growth and productivity gains achieved in at least 150 years that were past were due to past inventions such as computers, electricity, indoor plumbing installations, electronics, heating and the internal combustion engine. He said that before the economies were 4 headwinds-a flawed education system, an aging population, economic inequality and debt that were too difficult to overcome.

Gordo gave a lesson in history of world economies and the growth rates from 1300-1700 and from 1891-2007. He highlighted that inventions such as the telegraph, steam, electricity and railroads caused growth but the recent happenings and growth figures were not promising.

He gave some figures saying that the hours worked for each person had declined as boomers retired and jobs disappeared causing males in the working-class lose their positions. College completion figures stand at 15% points below Canada’s completion rate due to inflation in the higher education costs. He said that if the growth trend continues then the 0.2% per year growth before the Industrial Revolution would be all that would be achieved.

His conclusion, only great inventions such as those of Alexander Graham Bell and Thomas Edison and the like will get us to a standard of living better for our kids and future generations.

Erik Brynjolfsson, MIT economist, had an opposite view.

He said declared that growth was not dead. He said that the reason for this was that technology’s benefits take a longer time to root. He pointed out that even when electricity was invented the benefits were realized and reaped later by factories when people reinvented systems and that will be the case for computers also.

He made some noteworthy points such as the machine age was more of knowledge creation; ideas and not things, brain and not brawn. Also of note is the free stuff social networks, music, telecommunications which is not reflected in the GDP.

Brynjolfsson said that arguing that technology was stagnating were wrong as highly intelligent tools such as the IBM’s Watson. The challenge was that as technology was racing ahead many more were being left behind.

The two were engaged in a debate by Chris Anderson TED conference curator. They debated on whether robots should be made to replace all human activity, if their end is to increase happiness and utility of humans to which the arguments were about the unemployment they caused.

Anderson carried out a last survey asking the TEDsters where they stood in estimating the progress whether they would rather have indoor plumbing installations or the internet to which 60% voted for indoor plumbing and 40% internet. On a survey o whether progress was slowing or accelerating. Few hands for progress slow growth and may for accelerating improvement. Big surprise. 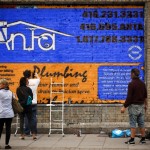