Why are my drains gurgling? That’s a question many people ask when they call us here at Anta Plumbing.

Drains tend to make strange noises when there's trouble with the plumbing. It's not unusual to hear glug glug, blub, or similar gurgling noises. The issue could be any of the following:

The most common gurgling you will hear, is in the basin when you flush the toilet. It usually happens if the pipes are not vented appropriately, which causes the water to flow slowly and can result in blockages. When air passes through the p-trap of the basin, it causes a gurgling noise. If there's enough air to empty the trap, it will break down the air barrier between your home and the nasty and dangerous sewer gases.

Plunging the toilet is one way of clearing the vents, but an ongoing problem may require that you have some pipes repaired.

Here's how to clear the drains and the vents:

1. Cover the overflow tubes using duct tape and close the sink drain to keep the plunger's force in the pipes. While partial blockages in a toilet waste pipe can force air to the sink drain, plunging the toilet can remove the blockage.

2. Plunge the drain and then flush it. Do you hear any gurgling? Then you need to plunge again, until it is clear, or until you give up and call the pros.

3. Check the openings of the main vent stack on the roof to see if it is blocked with debris or leaves or if the screen is dirty. Clear it and check again.

4. Drain the vent pipes using a garden hose. Water may clear obstructions deep inside the pipes. If the water backs up out of the vent, you most probably have a blockage. You should be able to remove it using a sewer auger.

5. Insert the auger into the vent opening and allow it to unwind until you notice resistance. Now crank the handle, allowing the head to work into the blockage. You will have to pull the head out every so often to clear out the debris. Once the blockage seems to be cleared, insert the hose to allow more water into the vent. Check if water backs up out of the vent. If it does, the blockage has not yet been cleared.

6. If the gurgling persists, look underneath the sink for an airflow valve, which is installed to compensate for inadequate venting. It will be connected to the horizontal arm of your p-trap. Unscrew the valve using adjustable pliers and replace it. It is an inexpensive part that is easy to replace.

If you can't stop the gurgling, it is time to call a plumber. You may need new pipes if the venting is inadequate, and it is possible that your drain setup is ineffective and illegal. If your p-trap empties, it allows hydrogen sulfide and methane into your home. Hydrogen sulfide tends to cause sinus infections, while high percentages of methane can asphyxiate you or cause explosions. 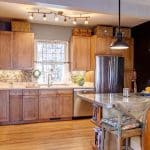 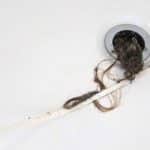