Who was Martin Cherrington?

Cherrington was a Los Angeles utility installer in the early 1960s. The idea of horizontal directional drilling was inspired when he was at a job and watched another business installing a gas line. They were using a hand-held air drill and he found out they were using guided drilling on their job.

That motivated Cherrington to do some research and he started thinking bigger. He quit his job as a utility installer and started his own business called Titan Contractors Inc. in 1964.

The entrepreneur said in a media interview that he felt comfortable making the move because of both his and his father's background.

"My father was a general contractor and I had an incredibly wide foundation in civil construction," he explained. "Because of my diverse educational background, I felt at ease with welding fabrication and other mechanical-type tasks."

Cherrington built a drill rig and had a contract and various agreements to operate. He said his drilling machine was constructed simply. It had a carriage revolving around a drill pipe. He described it as a small operation that was light and almost like a skeleton.

The First Uses of Horizontal Drilling

The first use of this type of digging was for road boring to install utilities. His company began working with utility companies in the Sacramento area and soon his team gained a reputation as a major road-digging contractor. There wasn't computerized tracking then so his team used a technology he obtained from a gas company in Los Angeles that involved using a hand-held air drill.

Cherrington said they would dig out small holes, which he called "potholes," along the boring route that would allow them to look at the drill head's direction and angle.

Road work would soon give way to the next phase of use for horizontal drilling. Cherrington got a job with Pacific Gas & Electric Co. (PG &E) in Watsonville, Calif.  The year was 1971 and he was drilling for gas lines. PG & E liked the innovation that Cherrington showed them and asked him to look into a minor issue they were having while he was in town.

The issue was whether he could dig beneath the Pajaro River. PG&E wanted a four-inch gas pipe installed across the river.

This was not considered a possible feat back in the 1970s. No one had ever done it. There were computerized locaters back then. Cherrington researched oil drilling techniques. It took him a month but he finally found a way to break through to the other side of the river.

Cherrington said he didn't think much of the project because he believed it was a one-time deal. However, word of his accomplishment spread and he was hired to do a larger waterway in Louisiana.

A Houston job that used Titan Contractors later had the company install a 40-inch diameter pipe in 1970.  Advancement of Horizontal Drilling

Cherrington said it took about 10 years after his first river crossing for horizontal drilling to catch on.

He created Cherrington Corp. in 1984 and based it in Sacramento. This company specialized in horizontal drilling for the installation of fiber-optic cable. Cherrington remained at the company until 1996.

New technology moved the science of horizontal drilling forward and it was eventually picked up by the oil industry. Two major advancements in the technique were tracking and steering.

The machinery is smaller and less obtrusive than standard vertical drilling equipment. It can move into areas previously inaccessible and unable to be utilized because of the smaller equipment and targeting drilling.

Those who work in the horizontal drilling industry also state it offers more durability in installation. The machines are stronger and better and can bore through tougher elements like rock and clay. The result is less equipment being used and less time spent in the drilling process. It also leaves less of a carbon footprint.

The pipes used in horizontal drilling are more durable than previously also, resulting in fewer failures. That ultimately means less cost but also a positive impact on the environment.

Overall, horizontal drilling is better for the environment for those reasons. It causes less disruption to the natural areas and allows those areas to recover more quickly than open-cut methods that use trenches. Less dirt is displaced and less dirt has to be replaced.

Anytime a company can do less work or have less disruption automatically makes it more environmentally friendly.

Horizontal drilling is as effective as other methods too. After all, it can be used as far down as 10,000 feet into the shale before it turns to go horizontally. Then, it can be used for another few thousand feet in that direction.

The technique has been used all over the work on well over a thousand rigs. 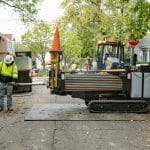