Last year, a Toronto man received a surprise in his water bill. He usually paid just over $300 per month, but one month, it was a whopping $1,977. Since he did not have a pool or a sprinkler system, he was shocked at this huge jump in his water bill, so it was put down to a possibly faulty new water meter installation. However, that was checked and found to be in good working order by the City of Toronto. Eventually, the problem was traced down to a running toilet in the basement.

Many basement toilets in Toronto are seldom used, and leaks can easy to go undetected. Leaking up to 7 cubic metres of water every day, it can easily run $20 down the drain every day.

Here at Anta Plumbing, we have seen the same thing happen to many of our clients. That's why we recommend that all our clients regularly check the water levels in their seldomly used toilets.

While there's not much to do to prevent a toilet from starting to leak or run, you could:

check the water level. Simply lift of the lid to the toilet tank and check if the water level reaches the indicator.
listen for unusual noises coming from the toilet. Any filling or emptying noises can be a sign that something is amiss.

Generally, all the parts inside a toilet should be replaced every 7-10 years.

Fix Your Running Toilet - Save on Your Water Bill

As you read above, a running toilet is not only costly, but it can be annoying too. Luckily, it's not a massive job to fix it.

Basically, the fill valve that is located in the middle of the tank, rises and falls according to the water levels. When the float goes up, it eventually stops the tank from filling up more.

Now for the tricky part: Diagnosing the cause of your running toilet.

Understanding the reason for the leak will make it much easier to fix your running toilet fast. A few parts may be to blame -

#1 - Cause of a Running Toilet: Worn Flapper

The flapper sits on top of the flush valve, and it does get worn out quite easily, particularly if you use chlorine cleaning tablets or if you have hard water.

If the seal is worn, it will allow water to leave the tank. Replacing the valve is an inexpensive way to stop the leak.

#2 - Cause of a Running Toilet: Long Flapper Chains

The toilet handle is connected to the flapper by chain. If the chain is too long, it will become stuck between the flush valve and the flapper. The flapper won't seal properly and the toilet will run. The chain has to be shortened to prevent it from becoming lodged under the flapper chain.

#3 - Cause of a Running Toilet: Too Much Water

If the tank is too full, it will leak. This can be fixed by adjusting the float that is attached to the fill valve.

#4 - Cause of a Running Toilet: Bad Fill Valve

If your fill valve is bad, your toilet will run. Thankfully, it is easy to fix using the on-pack instructions.

If none of these fixes seems to work, it is possible there is another issue causing your toilet to run. Get in touch with Anta Plumbing to check it out for you. 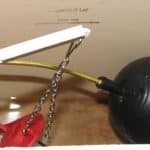 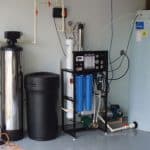