Drainage systems usually come equipped with a ventilation infrastructure that helps regulate air pressure as well as stop bad and dangerous odours from escaping your pipes.

Drain pipes are designed so that waste is pushed along with the help of gravity. That’s why they’re often angled to the floor. But they also need the help of natural pressure, which functions better with ventilation. The combination of these two things helps water and waste move without difficulty. 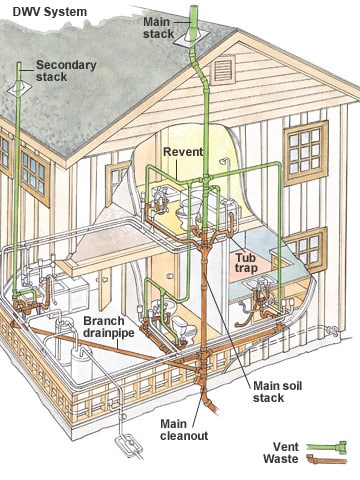 With a proper drain-waste-vent system you should be able to avoid the strange oddities that come with poor ventilation.

Things like gurgling, foul smells, noisy pipes, and bubbly toilets are all sometimes the result of poor ventilation in your house.

This article will go over all of the ways in which you can identify clear ventilation problems and distinguish them from other plumbing issues like drain clogs.

As mentioned above, a drain-waste-vent system is not only important because it equalizes pressure in the drain line, but also because it removes sewage and stench from your house. 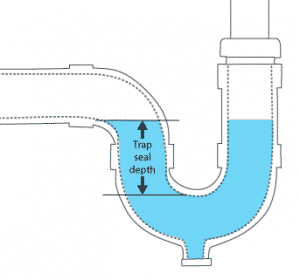 Those wiggly shaped pipes, called water seal traps, under your sinks and in your toilets hold a small amount of water that catches odours from passing through your sink.

Within these traps there’s something called a water seal, which is the “maximum vertical depth of liquid that a trap will retain measured from the crown weir and the top of the dip of the trap.” The higher the depth of this water seal, the better your trap will work on catching those odours.

With a poorly ventilated system, however, it won’t matter how effective your traps are when there’s no water. You’ll know right away when this happens as the smell can be awful and dangerous. But before resorting to any extreme measures, it’s always good to clean out any possible clogs.

Another obvious sign your ventilation system is acting up is when your pipes start emitting strange gurgling sounds.

It’s important to note that drains are designed to be silent, so if you hear anything from them then it’s probably a sign that there’s poor ventilation.

Bubbling up and slowing down

Slow drains are most often the result of a clog, but if you’re unfortunate you may encounter a plugged vent.

Plugged vents can slow down your drain action making it sluggish. These are probably the most difficult to fix because it can sometimes require breaking through walls. Once all resources have been exhausted, you’re probably going to want to call a plumber for this one.

Aside from slow drains, another strange phenomenon that occurs with poor ventilation is bubbling. When there isn’t enough air to equalize pressure in your drain pipes, it can cause bubbles to form.

If you experience this, don’t panic, it’s just a plumbing issue. There’s no need to call the doctor. 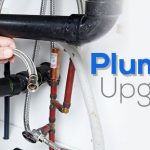 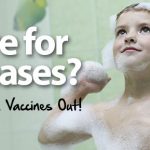