Toronto is one of the greatest cities in Canada to live in; the weather is nice, there’s lots of culture and diversity, and there are tons of places to see and activities to do. However, Toronto does have a problem that some people are all too familiar with, and others simply aren’t aware of; plumbing. To be more specific, the problem is flooding. 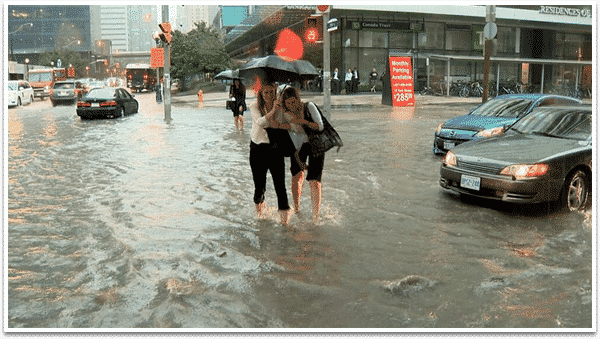 The city of Toronto has over 32 areas that experience flooding to some degree dating back to the early 2000s. In 2005 Toronto was hit with a particularly bad storm that caused flooding so severe it caused large amounts of damage to residential homes, as well as the city’s infrastructure, including: roads, bridges, culverts, and sewers. It was so severe in fact, that the city received over 4200 complaints of flooding, most of which were located north of the 401. 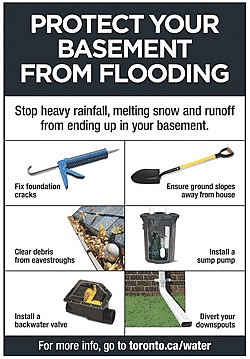 The 2005 flooding caused so much damage that the city implemented a “Basement Flooding Work Plan” that required a comprehensive engineering review of flooding in areas of the city that are prone to chronic flooding. The goal of the “Basement Flooding Work Plan” was to prevent surface flooding in an economical fashion, while also reducing the amount of stormwater entering all the storm, sanitary, and combined sewer systems. It was an honorable attempt at solving the city’s flooding issue. However, as with most municipally implemented programs, little progress has actually been made to stop the flooding. It has been almost 10 years since the program was implemented and Toronto is still experiencing a flooding problem in a staggering 32 areas across the city (keep in mind these numbers don’t even include the GTA).

If you are one of the residents of Toronto who experiences flooding you may be wondering what causes it, and what, if anything, you can do to prevent it. According to the city of Toronto’s website, there are two main causes of flooding. The first cause is stormwater and or groundwater seeping into the home. This can happen for several reasons: there could be a crack or leak in the basement’s foundation, poor lot grading or drainage, failure of the weeping tiles system – also known as foundation drains, overflowing eaves troughs, and leaking or plugged downspouts. The second cause is sewer backups. Toronto has three types of sewers: a sanitary sewer – which is connected to a home’s plumbing, and carries sewage to a sewage treatment plant, a storm sewer – which collects stormwater from street drains, connected downspouts, and weeping tiles and carries it into nearby watercourses, which ultimately leads to Lake Ontario, and lastly a combined sewer – which exists in the older parts of the city, and collects both stormwater and sewage in the same pipe, which eventually ends up at a sewage treatment plant. Any one of these three sewage systems can get backed up and cause residential flooding. 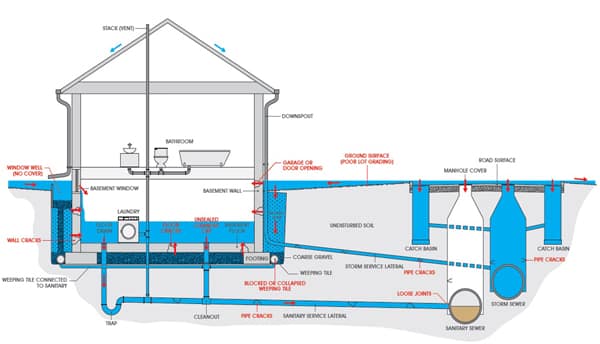 The good news is there are preventative measures that can be taken to prevent or reduce chronic flooding. These include: sealing all openings in walls, floors, windows and foundations, as well as sealing all window wells. Ensure the grading around the house slopes away from the foundation wall to help drain water away from the house. And repairing or replacing any damaged weeping tile systems.

Although these options may help prevent flooding the problem could still persist. If this is the case the best option would be to call a plumber and have a professional assess the situation. Toronto has many options available and choosing which one to go with can sometimes be a problem. If you feel overwhelmed and don’t know where to start Anta Plumbing is a great choice. Anta Plumbing is a member of the BBB (Better business bureau) and they offer competitive prices and the experience and knowledge required to help deal with all kinds of drain related problems, including flooding. Anta Plumbing specializes in the repair and maintenance of all drain and sewer systems. In addition to repairs, they also offer preventative maintenance for flooding.

If you’ve been dealing with flooding for some time; if you’ve tried everything to prevent it to no avail, why not give Anta a call, and let a professional take a look. 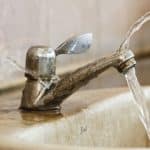 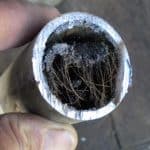